March 2018 – Best Aircraft Sales Month in More Than A Decade! 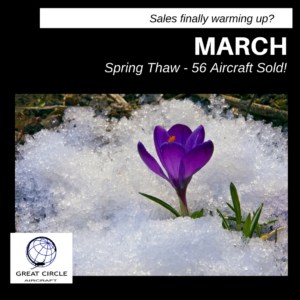 March 2018 – Best Aircraft Sales Month in More Than A Decade! The information below: (Lear 60 through BBJ)

March 2018, was a surprise with 82 Aircraft in this segment Added to the Market!

The market is continuing in the direction of what was once considered “normal,” that being 8% of the market for sale. Only the record setting performance of Aircraft Sold during March maintains this metric.

Some airplanes have entered into scarcity market condition.

March was the month of the:

Data without insight, often is useless.

For additional insight regarding this data or if you are interested in receiving specific aircraft market data, contact me at (425) 822-7876.